What It Means to Rock OR Reflections on Guitar Hero 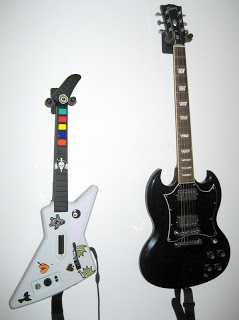 Rhythm games themselves are not new, and Dance Dance Revolution (henceforth referred to as DDR) was the most popular. I remember when I was living in the dorms at Purdue seeing random people in the floor lounges and at the arcade in the union / in the bowling alley wildly convulsing over floor sensors, and having an absolutely fantastic time doing it. However, in order to participate in DDR, you either have to be unaware of how silly you look, or just not care (the recommended choice).

All great ideas seem so simple after they're implemented- basically Guitar hero is the fusion of the fun gameplay of DDR, combined with the common fantasy of being a rock and roll star by way of the mechanics of playing the air guitar, and it is a great time. It still takes a pretty large amount of self confidence to not feel silly playing it while other people are around, but nobody can say it's not a good time.

Every year a staggering number of people take up playing the guitar. Why? Because playing the guitar is effing awesome. It rocks. I loved music when I picked up the guitar at 14, and I love listening to and playing music even more now, but honestly one of the big motivating factors for sitting and shredding my fingers and absolutely sucking for years was to play guitar, rock out, and be cool. Now I play guitar because I love to make music, but it is a nice side benefit to look sort of cool in the process- but this video game taps into that base dream and makes it easily accessible to everyone.

With guitar hero, you don't have to shred your fingers and practice for hours a night for years to be able to rock out. Just plug in the guitar controller, set it on easy and play until you're capable of e-shredding on expert, it's an instant rock star fantasy camp, and it's even more fun when you’re among a group of people who can enjoy it too. It's so simple, and they have got to be printing money with the concept even though the game and the controllers cost so much. The original guitar hero developers seem to be releasing a game soon that will incorporate singing and drums along with the dual guitars, so you and your friends can form your own little plastic rock band.

Originally I basically scorned this game because it allows people to tap into an experience that I spent a lot of time and work to get. I may not be the most talented guitarist in the world, but I worked pretty hard to get decent, so why should anyone else get to feel like a fancy pants guitaring person without building up the callouses first? Of course, this is a completely silly reaction as the two activities are wildly different, but it didn't help that I completely and totally sucked at the game the first time I tried it (hint: pretty much everyone does no matter their skill level, although I would like to have somebody like Clapton try it just to see).

In the end, when enjoying the game for what it is, an incredibly fun virtual fantasy camp style experience, there’s nothing quite like it. Playing with a group of people who enjoy it makes it an even better experience.

However, even with my small time band that plays covers most of the time because it's the easiest way to get people to listen to our originals (and also because it's fun to play songs that you like from bands people know), the feeling of playing to a crowd of people who are enjoying the music and responding to what's going on up on stage is a million times more of a rush than hitting the star power or getting achievements. That's why guitar hero3 is insanely fun, but it absolutely, positively does not rock.