My Couch is Nerdier Than Most

Having a laptop or a tablet on the couch while watching TV is of course not a new thing. As soon as portable computers shifted from something that looked like a suitcase to the trackball sporting beasts of the early 90s, people have been participating in the dual screen experience. Lately however I've taken a new approach to partially reclined computing that I've been enjoying.

A pain in the neck

A couple of years back the consequences of 25+ years of hunching over in front of computers caught up with me in the form of some severe neck and back pain. This forced me to not only get a bunch of treatment, but also to really think about my posture and ergonomics in every daily situation.

One consequence of this stretch of time is I had to give up using a computer for anything more than a few minutes if it didn't involve sitting or standing up straight in front of a screen at eye level. Not really something that's compatible with a laptop on a couch.

My solution was to just not use a computer unless I was seated at my office desk with the full complements of my fancy chair and all the proper adjustments. Otherwise, any other electronics time was conducted exlusively via phone or iPad, and was mostly passive reading or messaging.

Over time, I've been mostly happy with my "OS X downstairs, iOS upstairs1" approach, but I've been more recently motivated to try something new. I have a wonderful girlfriend and a menagerie of pets that I would like to not be secluded from, but many things I like to do call for a good deal of typing, and I would like to do so without injuring myself.

That, and I wanted to be able to quickly and easily type incomprehensible gibberish reactions during Colts games in front of my big dumb plasma television.2

On a whim, I MacGuyvered a solution from things I mostly had lying around. The most important thing for me is being able to look at a display at eye level so I can avoid hunching over.

So, starting with my beloved iPad Air 2 I mostly use to read, I acquired a cheap adjustable arm, attached it to our always handy C-table, and paired up a salvaged bluetooth keyboard. Then, it was off to the comfortable typing races, with the added bonus of being able to quickly and easily dissassemble and stash away my weird looking monstrosity. 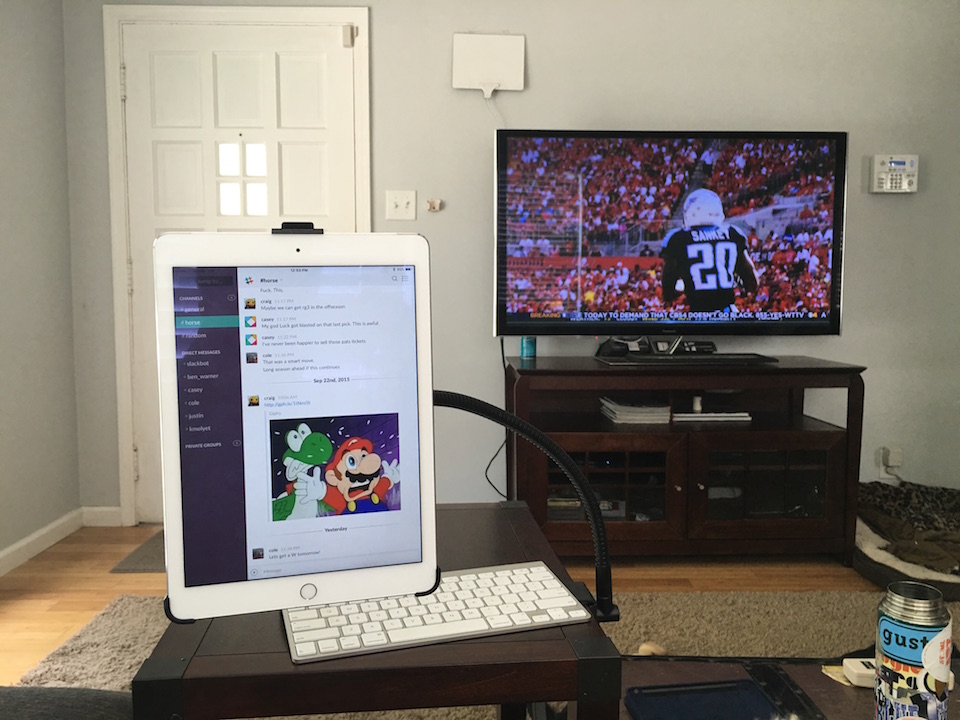 The thing that really makes all this work is the expanded keyboard support for iPads in the newly released iOS 9. Just the ability to cmd+tab between apps and cmd+space spotlight searches almost makes me feel like I'm right at home on a mac. It's not quite 100% there, but it's way better than other attempts I've made in the past. Often I prefer the more constrained approach to multitasking, especially when I am most likely already doing so by looking at a big screen in the first place.

But what does it do

I won't lie, this is mostly a thing that will get heavy usage for chat slinging and checking fantasy football scores on fall Sundays, but I am intrigued at having another set of tools at hand to write with.

Right now it would be hard to make a complete end to end post to this site due to the way it's built, but coming up with an easier process could be worth exploring. Either way I can type, and stringing words together is 99% of the battle anyway.

Another pipe dream is being able to write up some quick code from a shell or even something like Coda for iOS, but I'm probably way too picky make that work. But who knows, obsessing about only using just the right tools is something I'm trying to do less3.

I'm also interested in trying more things I would only consider doing on a traditional computer with this neutered robo-giraffe setup. Some interesting people seem to like creating things mostly on iPads. Maybe I will too. Clearly I don't mind looking silly in the process.